Mortgages: 30-year fixed rate has jumped a point since early May

As mortgage rates increased a full percentage point combined with rising prices housing becomes less affordable. While historically rates still low,  time is now to make a move before more potential home buyers are priced out of the market.


Mortgages: 30-year fixed rate has jumped a point since early May 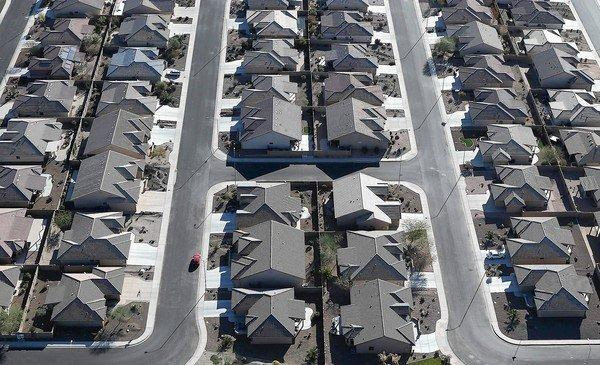 Residential mortgage rates aren't just up from the bottom -- they have zoomed a full percentage point above recent record lows, reaching the mid-4% range.

The average rate for a 30-year fixed-rate home loan hit 4.63% on Monday, according to HSH Associates, up from the 4.33% that HSH recorded Friday and a record average low of 3.44% for the week that ended Dec. 14.

The rocketing rates are choking off a boom in home refinances that hit high gear in September 2011, when the 30-year fixed rate dropped below 4% for the first time on record.

Although the rates remain exceedingly low by historic standards, the increase adds to payments, pricing marginal borrowers out of the market for homes they want to buy.

Investors have been demanding higher interest rates since last week, when Federal Reserve Chairman Ben Bernanke said the Fed could begin tapering off its massive purchases of Treasury bonds and mortgage securities later this year.

The purchases, which stimulate the economy by keeping rates low, could end by the middle of next year, Bernanke said, rattling markets that also are skittish about a credit crunch in China, the world's second-biggest economy.

The yield on the 10-year Treasury note, generally a benchmark for fixed mortgage rates, rose for the sixth straight trading session Monday to close at 2.55%. It was 1.66% on May 2.
It’s difficult to tell whether the jump in rates reflects a new reality or simply an increase in volatility caused by confusion regarding the Fed’s plans, the Mortgage Bankers Assn. said in a financial commentary Friday.

“Regardless, refinance application volume, which had already dropped roughly 40% over the month, is likely to fall further,” the trade group said.

HSH is among the more prominent trackers of mortgage rates, each with a different methodology. Another survey, from Bankrate.com, bottomed out at 3.5% last December and fell nearly that low again May 1 at 3.52%.

“If we did the survey today, I’d say we’d be up close to 100 basis points,” meaning a full percentage point above the record low, Bankrate senior financial analyst Greg McBride said Thursday. That would leave the rate “around 4.5% on 30-year fixed,” he said.

The most widely followed survey of mortgage rates, from the giant home finance firm Freddie Mac, is released each Thursday. It bottomed out at a reading of 3.31% on two occasions last fall. The latest Freddie survey, taken early last week before Bernanke's remarks, showed rates pausing in their upward spiral, falling to 3.93% from 3.98% a week earlier.
Source: http://www.latimes.com/business/money/la-fi-mo-mortgage-rates-jump-20130625,0,5218841.story?track=rss

Home price gains likely to remain strong. Shortage of new homes for sale likely to get larger before getting smaller. More demand than supply of new homes have caused prices to rise. 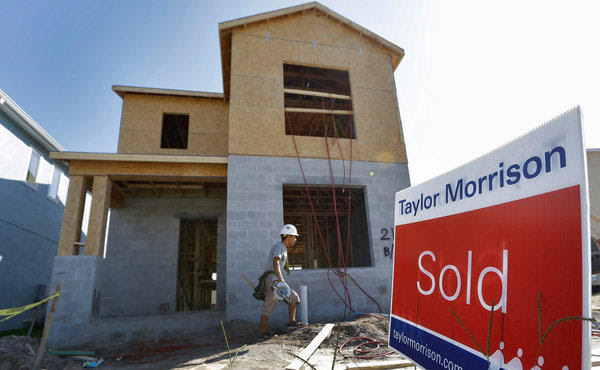 New home sales surged more than expected last month, a good sign for a building sector that has an oversized role on the broader economy.

Sales of new single-family homes rose 2.1% from April to a seasonally adjusted annual rate of 476,000, the Commerce Department said Tuesday. That was the highest rate since July 2008 and 29% more than May of last year.

Home values have risen sharply lately as buyers compete for few available homes. That lack of inventory and price growth has builders turning dirt and increasingly confident in the new home market.

That is not only good news for those in construction but also related industries such as lumber, and heating and air conditioning.

New home sales rose from April in all regions except the South, but were up across the nation compared with last year.

The median price for new homes in May was $263,900, down 2.8% from a month earlier.
Supply remains below average. If new homes continued to sell at the current rate there would be a supply of 4.1 months, unchanged since April.

Also on Tuesday, a leading home price index showed strong growth during April in the nation's largest cities. The Standard & Poor’s/Case-Shiller index rose 2.5% from March and 12.1% over the last year.


"The shortages are likely to get larger before getting smaller, which means that home price gains in most cities and states are likely to remain strong for some time," they said in an emailed analysis.

Posted by Sandra.Lew at 9:51 AM No comments: 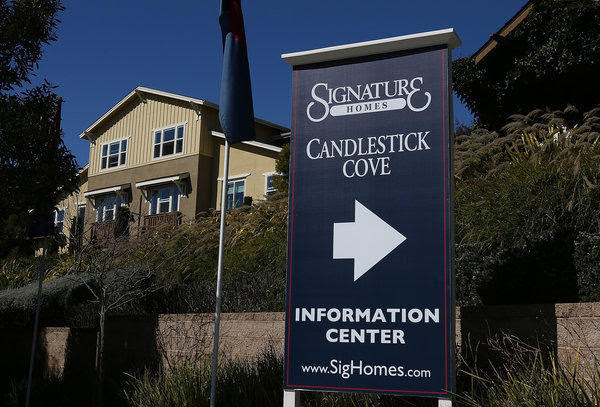 But while sales increased last month to a multi-year high, they remained 9% below average as tight inventory continued to define the market, DataQuick reported.

The lack of homes for sale, low interest rates, investor demand and an improving economy have caused sharp price increases recently. The median price paid for a home in Southern California rose 24.7% in May from last year, while the Bay Area jumped 29.8%.

The median sale price is the point at which half of homes sold for more and half sold for less; it is influenced by the types of homes selling as well as a general rise or fall in values.
Helping the median rise is the declining percentage of distressed sales. Notices of default -- the first formal step in the state’s foreclosure process — fell 10.2% last month from April, according to PropertyRadar.com

Homes that had been foreclosed upon within the last year accounted for 11.4% of homes resold in California — the lowest point since August 2007, DataQuick said. Short sales also dropped last month compared to May 2012.

Statewide, the median has increased year-over-year for 15 straight months, but is still below a peak of $484,000

Posted by Sandra.Lew at 9:43 AM No comments:

Looks like mortgage rates are trending upwards. Ultra-low rates may be history soon. 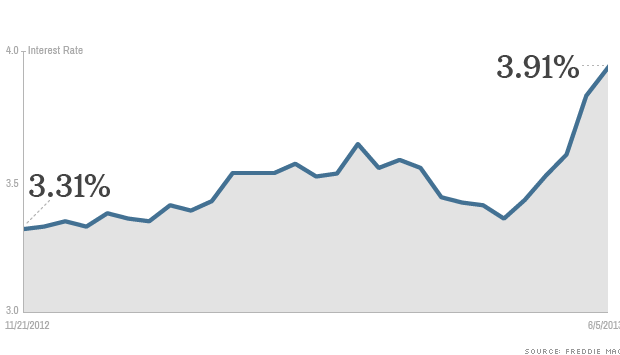 In the past month, rates have been on the rise and they are expected to continue to climb.

This week, the average rate on a 30-year fixed-rate mortgage jumped another 10 percentage points to 3.91% and are up from 3.3% in early May, according to mortgage giant Freddie Mac. Meanwhile, those seeking a 15-year loan received an average rate of 3.03%, up from 2.56% -- a record low.
"It's unlikely that rates will ever be that low again," said Doug Duncan, Fannie Mae's chief economist.

Those who didn't take advantage of record-low rates have missed the boat -- at least for now. Here are three reasons why.

The Fed is going to stop bolstering the housing market. The Fed has kept rates at rock-bottom levels by buying up to $85 billion a month of Treasury bonds and mortgage-backed securities. That has enabled lenders to sell mortgage loans at low interest rates and recoup their money immediately -- plus profits.

"Up until recently, expectations were that the Fed would begin to taper purchases of mortgage-backed securities (MBS) and Treasury bonds late in 2013, but that timeframe appears to have moved to September, possibly sooner," said Keith Gumbinger, vice president of HSH.com, a mortgage information company.

If the Fed stops purchasing the securities, private investors will have to pick up the slack. For investors to do that, the loans will have offer a better payoff. And that would mean raising rates for borrowers, said Duncan.

The economy is no longer reeling. During the recession, the Fed lowered its short-term interest rate to near zero in order to stimulate the economy. But now conditions have improved considerably since the economy emerged from recession four years ago. As the economic revival gains traction, it is creating a tailwind for interest rate increases, according to Gumbinger.

Low rates happen when the economy is in distress. But now, the market believes the economy is getting stronger, said Wendy Cutrefelli, a vice president in the Mortgage Banking Division of Bank of the West.

Job gains have picked up lately, averaging about 202,000 a month over the past six months.
That hiring is advancing rather than retreating is good news for the economy and any positive future reports are expected to push rates higher, according to Gumbinger. Even mediocre news might not cause any meaningful decline in rates.

3.3% rates are unprecedented. "The 30-year [mortgage rate] hit a 37-year low in 2003 at 5.23%," said Gumbinger. "That was the previous low-watermark prior to this financial crisis and it's likely we will move closer to that mark as we grind forward."

Any return to normal conditions, therefore, will likely be accompanied by higher mortgage rates.
Even if they go up a percentage point or two, however, mortgages will still be relatively low. Historically, 30-year loans are usually 5.5% or higher.

For clues to the direction of mortgage rates, look at the daily movements in 10-year Treasury bond yields. Mortgage rates track Treasury yields with the difference between them holding fairly constant.
These days, Treasury bonds have been on a jumpy uphill climb, with the 10-year hitting 2.21% on May 31, its highest closing since April 2012. On Thursday, the yield was about 2.10%. Since the interest rate on a 30-year is usually 1.7 to 2 percentage points higher, it indicates that mortgages should be at between 3.82% and 4.12% this week.