The Exceptional Public Access Plan for the Ballona Wetlands


The Ballona Wetlands near the heart of Silicon beach is an ecological reserve treasure. The bordering cities are Marina Del Rey, Playa Del Rey, Culver City, Westchester and Playa Vista. This new project is personal and exciting! Finally 600 more acres of beautiful nature with easy access for bicyclists, pedestrians, and handicapped to enjoy with less impact while preserving the natural beauty. This give us a safer alternative to getting out of our cars and be able to have easy access to local communities. This state proposal creates 6 miles of new foot trails and nearly 4 miles of bike paths and will create the second largest nature habitat in the City of LA! Yay!


The Exceptional Public Access Plan for the Ballona Wetlands 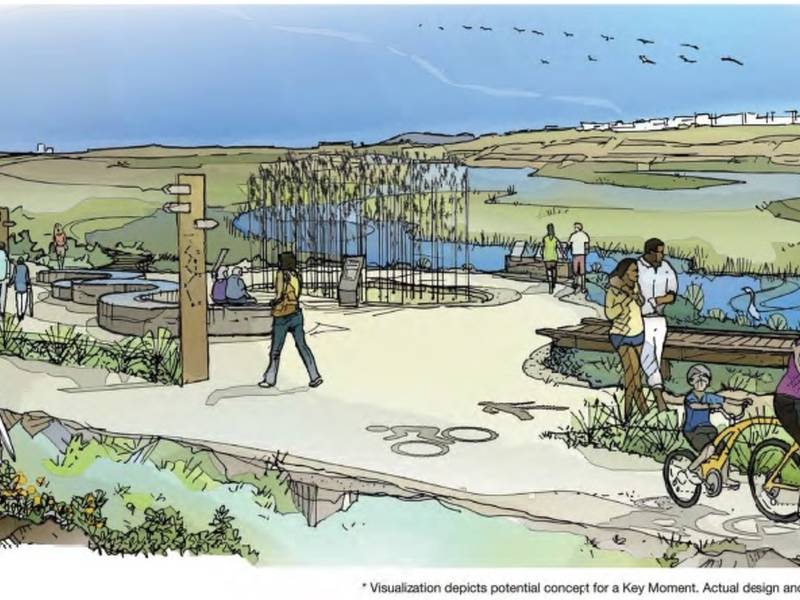 Did you know California's Ballona Wetlands Restoration Project will create the second-largest natural habitat recreational area in the City of Los Angeles, second only to Griffith Park? Indeed, it will become the "Great Park" of coastal Los Angeles, but few people are talking about this 600-acre recreational jewel.

People most intimately familiar with the Ballona Wetlands Ecological Reserve tend to focus on the wildlife benefits of the state's coming restoration project. As a member of Los Angeles' community of environmental professionals, I've often questioned supporters and peers about why they shy away from touting the public access and recreational benefits of this fantastic "undevelopment" project.

My sense from them is that many restoration advocates, particularly naturalists, view public access as a risky proposition for wildlife, if not well-regulated. In my opinion, these fears are unfounded and in fact, public access at recently completed large wetland restorations proves otherwise (1,2,3).
When completed, the proposed Ballona Wetlands Restoration Project (Link 4) will create nearly 6 miles of new pedestrian-only trails, including approximately 2,000 feet of elevated boardwalks to allow visitors to walk next to the wetlands and get close-up wildlife views. Trails would have native plants on either side where possible, and include signs and resting points with seating. The boardwalks will be specially designed to accommodate disabled persons. Just not that into wildlife? Then just come and have a picnic, read a book, or paint a canvas.


Two east-west bike paths, instead of the current single one on the north Ballona Creek levee, would connect with the Coastal bike path at the Beach – one north and one south of Ballona Creek. Also, we'll get a brand new bike and pedestrian bridge over Ballona Creek next to Lincoln Boulevard, separated from car traffic, so folks who live south of the creek will no longer have to navigate the hair-raising Lincoln Blvd. car bridge to access the bike paths. See the entire trails plan view below. Right click on the image to open in a new tab and see the details. 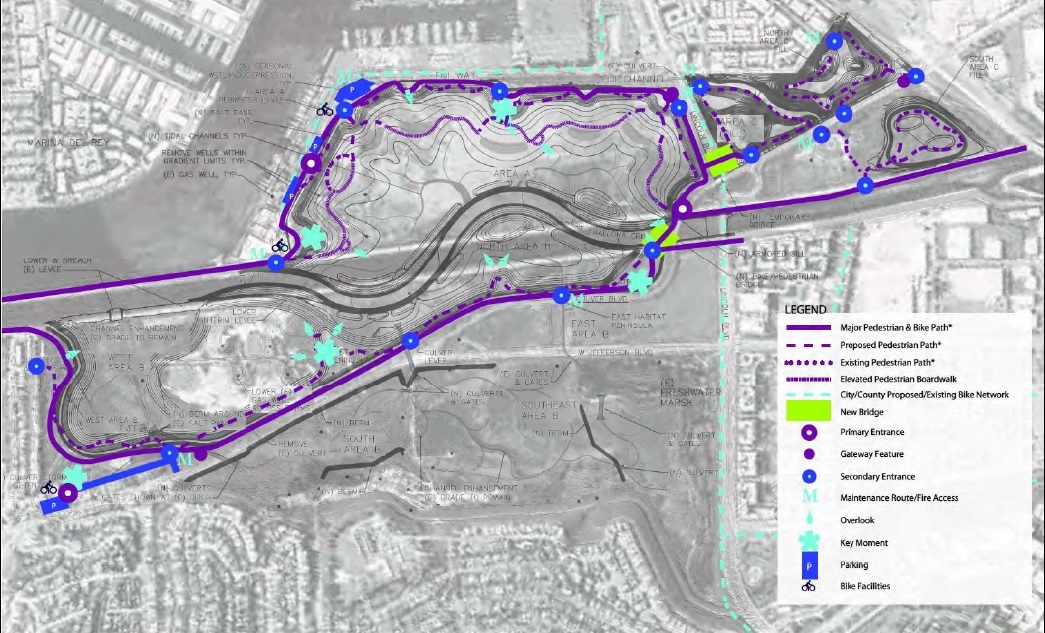 Fenced overlooks along paths and trails will provide views and information about the Ballona Reserve (see figure below). Overlooks would include informational and directional signage in some locations. Benches to accommodate small groups also would be included in some locations (for your picnic).

Three monument signs will be built at critical street intersections to identify the Ballona Reserve to passing vehicles, cyclists, or by pedestrians. The signs would be placed on the southwest corner of Lincoln Boulevard and Fiji Way, the northwest corner of Culver Boulevard and SR-90 off ramp, and on Culver Boulevard, north of Nicholson Street.
Five areas in the Reserve would give visitors close-up opportunities to learn more about wetlands habitat, animals, and the larger watershed system. Educational art pieces may be included as well. Sitting and picnic areas, trash receptacles and bathroom facilities will be provided at the main entrance point. Parking will be located in a few areas, but mainly where county vehicles currently park on Fiji Way. Access would only be allowed from dawn to dusk.
Since state law allows only well-regulated access to Ecological Reserves, most of the Ballona Reserve is presently not accessible except via guided tours conducted by a few non-profit organizations. This will all change with the state's project, which allows the public to freely travel a broad network of established trails and paths, but prohibits any off-trail access. Rangers on patrol will ensure folks stay on trails, keep dogs on leash and follow other rules and regulations customarily established for natural areas.
Above Photo: Public trail at the Malibu Lagoon Restoration Project.
Scores of coastal wetlands have already been restored in California, pursuant to the Coastal Act and funded by bond measures repeatedly approved by voters. At most of these sites, well-regulated trails and paths replaced old "social trails" which the public had worn into the landscape in a helter-skelter fashion.
Above Photo: Unregulated "helter-skelter" social trails in the Ballona Reserve, Near Via Marina.
Many studies showed these social trails potentially impacted wildlife, but the impacts were eliminated once fenced, signed and properly maintained trails were provided as replacements. Even absent ranger patrols, people tended to police each other in wildlife areas, studies show. During sensitive breeding periods, some trails are temporarily detoured to protect wildlife at critical times. This will be the case at Ballona as well.
Above Photo: Elevated boardwalk at the San Dieguito Wetlands Restoration, near Del Mar.
If you look forward to the recreational benefits of the Ballona Project, it's important to let your elected representatives know. Don't let a vocal minority speak for you! Send an e-mail to L.A. City Councilman Mike Bonin at mike.bonin@lacity.org, and tell Mike you "support approval of the state's plan to restore Ballona to a full tidal wetland, including proposed public access." Councilman Bonin will represent our interests on the state's proposed restoration plan.
Look forward to packing the kids or dogs in the car on a Sunday morning and having a nice picnic walk at the "Great Park." Enjoy your Ballona Wetlands! 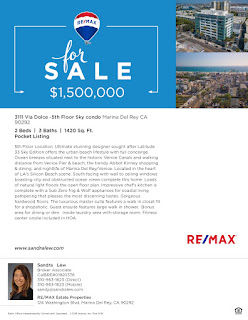 A decade after the housing crisis, a new story emerges

Interesting to keep up with the housing market a decade after the housing bust back in 2008. Ten years later has it recovered? Are we in a bubble again? States like CA have recovered with Northern California's Silicon Valley leading the pack with a 74% increase over the previous real estate bubble. Location matters most when buying real estate. Urban areas with sustainable economies fair the best in the long run. According to Trulia there was a 53% gain in 100 of the largest metropolitan areas. In contrast rural areas continue to stagnate at only a 28% gain. Silicon Valley and Denver had the largest gains. Las Vegas, Chicago and Orlando are still 14-16% below their levels before the pre-crisis financial bust. Population growth increases with robust job opportunities for urban centers in contrast to declining rural areas which are seeing migrations and stagnate growth. This is true also in Silicon Beach area's Playa Vista the tech hub center of Los Angeles fueling a higher demand along with rising housing prices. The housing market is doing well in our golden state of California.

I'm a real estate broker associate with Re/Max Estate properties based out of Marina Del Rey/Venice Beach the epic center of LA's silicon beach and loving serving the community with all their real estate needs. Feel free to connect with me with any questions. Thinking about buying or selling in the area? I'm here to assist as I cherish the beach lifestyle. Relocating so many to the area is so rewarding.

As many as 10 million Americans are believed to have lost their homes because of the financial crisis that erupted a decade ago, according to the St. Louis Federal Reserve. The crisis wiped out almost $8 trillion in household stock-related wealth and $6 trillion in home value after banks, mortgage lenders and financial companies provided loans to speculators, house flippers and people who couldn't afford to pay, spinning the economy into the worst financial disaster since the Great Depression.A decade later, how does the U.S. housing market look?

Homeownership is below pre-crisis levels
At the end of June, roughly 64 percent of homes were owner-occupied, according to statistics from the St. Louis Fed. That's below the historic highs of 2004, four years before the bankruptcy of Lehman Brothers, widely used to mark the acceleration of the crisis.   The current homeownership rate represents a slight increase from the 2016 low of 63 percent. The gain may signal that Wall Street is trading more mortgages as the Federal Reserve raises interest rates and lawmakers ease some of the post-crisis regulations on banks.

Fewer young adults and minorities own homes
Between 2004 and 2016, overall homeownership rates plummeted 8 percent, according to a study from the Pew Research Center. Demographics also changed.
Younger Americans felt the impact more than older homeowners. For adults between 25 to 44, the homeownership rate dropped 16 percent. And for adults younger than 35, the rate plunged 18 percent.

A decade later, it's clear the crisis delayed a traditional marker for adulthood -- homeownership -- for a greater number of young people.

"The typical household head is older now – age 51 today vs. 45 in 1994," the researchers wrote. "Older households tend to be more likely to own their homes than younger households, and thus today's homeownership rate is being propped up, in part, by an aging America." The crash is still being felt more keenly by non-white groups as well. Black households, for instance, also now own homes at a rate that's 16 percent lower, at 41 percent. That compared with ownership of white households at 72 percent, just a 5 percent slip in the same time period, according to the Pew study.
Prices are up, but are rising even faster in cities

If you live in a city, chances are real estate is now more expensive than in rural areas. Migration to cities is helping to drive the increase, according to a recent study from real estate website Trulia.

In the five years ending mid-2018, home values in the 100 biggest metropolitan areas rose 53 percent, according to Trulia. That's double the gain in rural areas, where property values rose 28 percent, the study found. The difference "between some of the largest metro areas and rural America is especially stark—many metros have seen robust growth in jobs and home prices, while many rural areas have stagnated," wrote Felipe Chacón, a housing economist for Trulia, in the report. "This divergence has boosted demand for housing in the nation's cities, fueling rapid rises in home prices.

A population shift to those urban areas is contributing
From 2012 to 2017, the U.S. population grew 3.7 percent. But in the 100 biggest metro areas, it expanded 4.8 percent. In rural areas, the population dipped 1 percent, the Trulia study found. Even among the urban areas, some cities are far more expensive than others. In Silicon Valley, the area around San Jose, California, the current median home is worth $1.29 million, statistics released this week by real estate search company Zillow showed. That's 74 percent higher than the top of the real estate bubble and more than double from its post-crisis low.  Denver was next on the list of increases, with a value of $397,800. That represents a 66 percent rise.

Rising interest rates are also helping tap the breaks
The Federal Reserve has already raised interest rates twice this year, and is expected to hike them twice more to keep the economy -- and the housing market -- from overheating. "While housing affordability is still running above longer-term historical levels, rising prices and interest rates have taken some steam out of demand," Deutsche Bank economists wrote in an August note looking at the housing market.