Americans have renewed confidence in real estate as a great investment. In fact, Americans believe real estate is the “best” long-term investment, followed by gold, stocks, mutual funds, savings accounts/CDs, and bonds, according to a new Gallup Poll of about 1,000 adults who were asked to choose the best option for long-term investments. Bonds were the least favorite investment among the options Gallup surveyed.

In 2011, Americans surveyed said the most popular long-term investment was gold. That also marked a time when gold was at its highest price and real estate and stock values were lower than today, Gallup notes.

“With housing prices improving across the country, Americans are regaining faith that real estate is the best choice for long-term investments,” according to Gallup. “Home ownership is also associated with views of real estate as an attractive investment opportunity.”

Americans with higher incomes are the most likely to say real estate and stocks are the best investments – “possibly because of their experience with these type of investments,” according to the Gallup poll. Higher income Americans are most likely to say they own their home (at 87 percent), followed by middle-income earners (at 66 percent) and lower-income earners (36 percent).

Home owners are slightly more likely than renters to say real estate is the best choice for long-term investments – 33 percent versus 24 percent, respectively, according to the Gallup poll.

Posted by Sandra.Lew at 1:54 PM No comments:

The international community is also a fan of our government and financial system, which I know some will find hard to believe.

Eight five percent of the buyers shopping for homes in the state last year said that they only considered purchasing a home in the U.S. because its stable government and financial system would guarantee their home investment.

The survey was conducted via email to a random sample of Realtors across the state.
It did not ask for the total number of homes sold to international buyers last year.

Not a surprise, really, because it follows the trend in quarterly reports from market trackers like DataQuick.

Inflation still at bay for now as mortgage rates have fallen again. 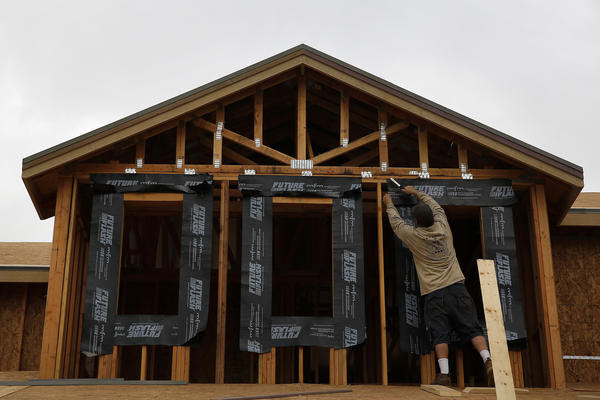 Mortgage rates fell this week as inflation appeared to be no threat, Freddie Mac said Thursday. Above, a home under construction in Irvine in January. (Patrick T. Fallon / Bloomberg)

Lenders were offering 30-year fixed-rate mortgages at an average of 4.34% this week compared with 4.41% a week ago, according to the widely watched survey from home finance giant Freddie Mac.


The decline in rates, reflecting a belief that overall inflation remains at bay, was also seen in 15-year fixed loans, which dropped from an average 3.47% to 3.38%.

Freddie Mac asks lenders across the nation about the terms they are offering on popular loan types to borrowers considered low risk and with 20% down payments or equivalent home equity in the case of refinance loans.

The borrowers would pay less than 1% of the loan amount to the lenders in upfront fees and discount points. It's possible to obtain lower rates by paying additional discount points. 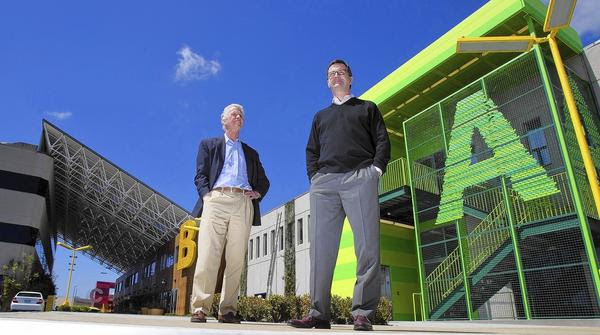 By Roger Vincent April 2, 2014, 4:06 p.m.
From some classic Adirondack chairs in front of his colorful new office complex near Marina del Rey, commercial landlord Ned Fox can sit back and watch his property value go up.


The developer who made his bones building skyscrapers in downtown Los Angeles during the late 1980s and early 1990s today finds himself with a close-up view of the rapidly evolving planned community of Playa Vista and the young tech and entertainment workers transforming the culture of what's become known as L.A.'s "Silicon Beach."

It's turning into a busy neighborhood. Right across the street from Fox's new office complex, steel girders and concrete walls are rising in one of the largest commercial projects underway in Southern California.

Meanwhile, Fox's work at his office complex, called Playa Jefferson, is mostly done. He saw to it that a fancy metal Foosball table was covered with a thick sheet of plastic in case of rain Monday but showed no concern for plush outdoor furniture nearby that he says is waterproof.

It's all part of the intentionally casual atmosphere at Playa Jefferson, which is delineated by three outdoor areas: the Front Yard, the Back Yard and the Commons — where the Foosball table sits. Visiting gourmet food trucks can pull into a reserved parking spot right off the Commons.

Across the street, developer Lincoln Property Co. is hard at work on a $260-million retail, housing and office and housing project called the Runway that will become the commercial heart of Playa Vista.

The neighborhood that was once considered undesirably remote for most white-collar businesses has emerged as a prime address for creative types who prize the laid-back look in their workplaces.
Tenants in the area include YouTube, entertainment media company TMZ and Sony Computer Entertainment. The Runway will include a Whole Foods grocery store, a 10-screen Cinemark movie theater, "chef-driven" restaurants and shops. There will also be apartments and offices.

The Runway should open by November, said David Binswanger of Lincoln Property.
Playa Vista already has more than 3,200 residences and still more are under construction. The Irvine Co. is building hundreds of apartments next to the Runway.

"Employees can live and work in the area," Fox said. "Playa Vista, from an office point of view, is really maturing and coming into its own."

Fox and his partner, Stuart Gulland, founded Vantage Property Investors in Manhattan Beach in 2003 to get in on the new trend in office development. Their two projects so far are a renovation of an old industrial building in the tech-centric South of Market neighborhood in San Francisco and Playa Jefferson.

Playa Jefferson is on land that was once part of Lopez Farms, which grew row crops across the street from mogul Howard Hughes' aviation business headquarters.

Industrial and office buildings eventually filled in the farmland. The last occupant of the four buildings at Playa Jefferson was Citibank, which used them for processing bank business and research-and-development work on the bank's automated teller machines. Citibank hid them behind a wall of trees and landscaping.

"It was kind of private," Fox said. "Citibank turned its back on the street."
Fox and Gulland bought the complex in 2011 for $35 million and went the opposite direction in appearance, pulling down the concealing foliage and painting the buildings bright colors. In a move suggested by their architecture firm, Gensler, the pair tore the sides off an atrium that connected to buildings and created the outdoor Commons.

The $20-million makeover also included the addition of a wooden deck and vertical metal bike racks.
"We mixed our building materials," Gulland said. "We want people to feel grounded to the environment."

In the 1980s and early 1990s, when Fox worked with developers Robert Maguire and James Thomas to build skyscrapers in downtown L.A., most companies wanted to give employees individual offices or at least cubicles. That model is fading, Fox said.

"Companies are flattening their corporate structures, sharing information and working in collaborative groups," he said. "Walls are less important."

Posted by Sandra.Lew at 4:28 PM No comments:

US home prices rose in Feb. despite weaker sales

Prices for existing homes rose 12.2 percent in February from a year ago. Factors such as bad weather combined with higher mortgage rates has reduced the volume of home sales to its lowest levels in 19 months. There is still a tight supply of homes for sale as inventory remains low which keeps prices high as demand still outpaces supply.


US home prices rose in Feb. despite weaker sales

WASHINGTON (AP) - U.S. home prices rose in February from a year earlier at a solid pace, suggesting that a tight supply of homes for sale is boosting prices despite slowing sales.

Real estate data provider CoreLogic says prices for existing homes rose 12.2 percent in February from a year ago. That was up slightly from January's year-over-year pace of 12 percent.

On a month-to-month basis, prices in February rose 0.8 percent from January. But CoreLogic's month-to-month prices aren't adjusted for seasonal patterns, such as winter weather, which can depress sales.

Snowstorms, rising prices and higher mortgage rates combined to reduce home sales in February to their lowest level in 19 months. The number of available homes remains below the level typical of a healthy market.

Posted by Sandra.Lew at 9:43 AM No comments: